823: column width not remembered across close/re-open

Bugs and other issues or requests which have been resolved.
Post Reply
5 posts • Page 1 of 1
Message
Author

823: column width not remembered across close/re-open

823 is supposed to contain the "fix" (introduced in 820 and persisting into 821 and 822) for the top/bottom presentation and repeated use of F10 to toggle between single-panel and dual-panel (top/bottom) mode, with Explorer Tree in left pane and Details in right pane for both panels.

Doesn't seem to be too good, although the primary "right-shift creep" of pane divider in lower panel is still not "fixed". But instead, there are now several new issues no doubt introduced as a result of the attempted "fix". Note that my beta version 8221 DID fix the right-shift creep issue. But this 823 version is not the same.

Here's the first problem. Single panel only (not dual-panel). The columns are too wide. These are not the original column divider locations I had with 819 originally, and which were present and just fine in the 8221 (beta) version you provided me. Now with 823, and single panel presentation, even though I drag the column dividers left to where I want them to be when I close and re-open the program the column dividers are right back where they were before I dragged them all to the left. The new column locations are obviously not being remembered.

Now that I look closely at my screenshots, I see that the column locations after close/re-open are not actually the very original locations. Yes, they are not what I manually set them to before closing the program. They have right-shifted by themselves from what I set them to before closing. But after the re-open they are neither where I placed them, nor exactly where they were before I moved them left. Perhaps some kind of auto-sizing is taking place now???

I have no special layout or profile. All of this is standard default. I simply expect the column divider locations to remain where I manually place them. these adjusted column locations should be retained in INI, and should obviously persist across close/re-open. I've tried to SAVE SETTINGS, BACKUP SETTINGS, and then close/re-open, and then RESTORE SETTINGS, and it made no difference. The column dividers are still at their original locations, with complete disregard for where I dragged-left each of them to my satisfaction.

(1) Original first open after installing 823. Columns are too wide, and there is a horizontal scrollbar at the bottom of the window. I don't want this. 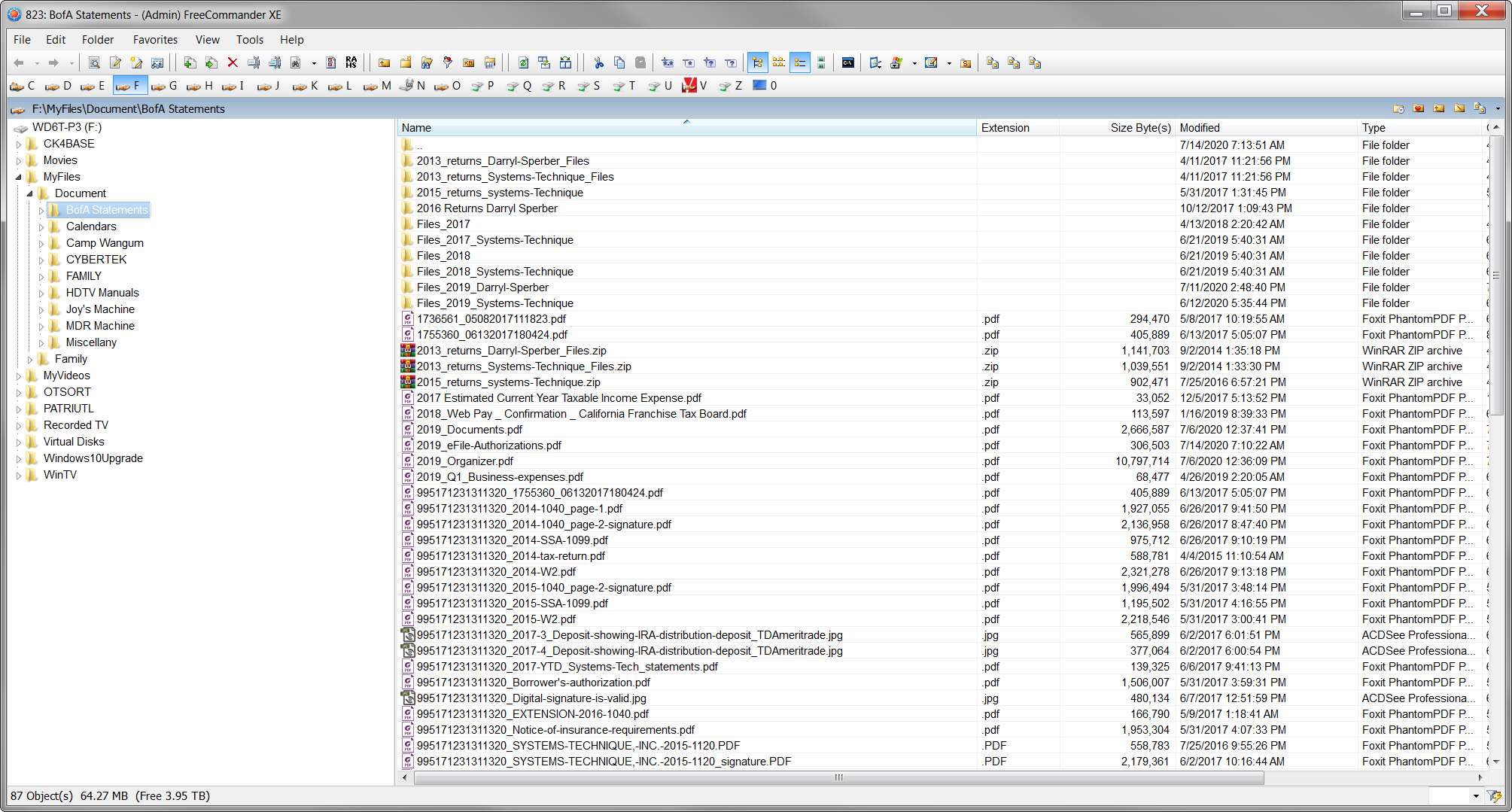 (2) After left-drag of each of the column dividers so that all columns fit in the current window width with no horizontal scrollbar at the bottom of the window. This is what I want. (3) I then close and re-open the program. The column divider locations I just set have been forgotten. The original column locations (which I didn't want) have returned. 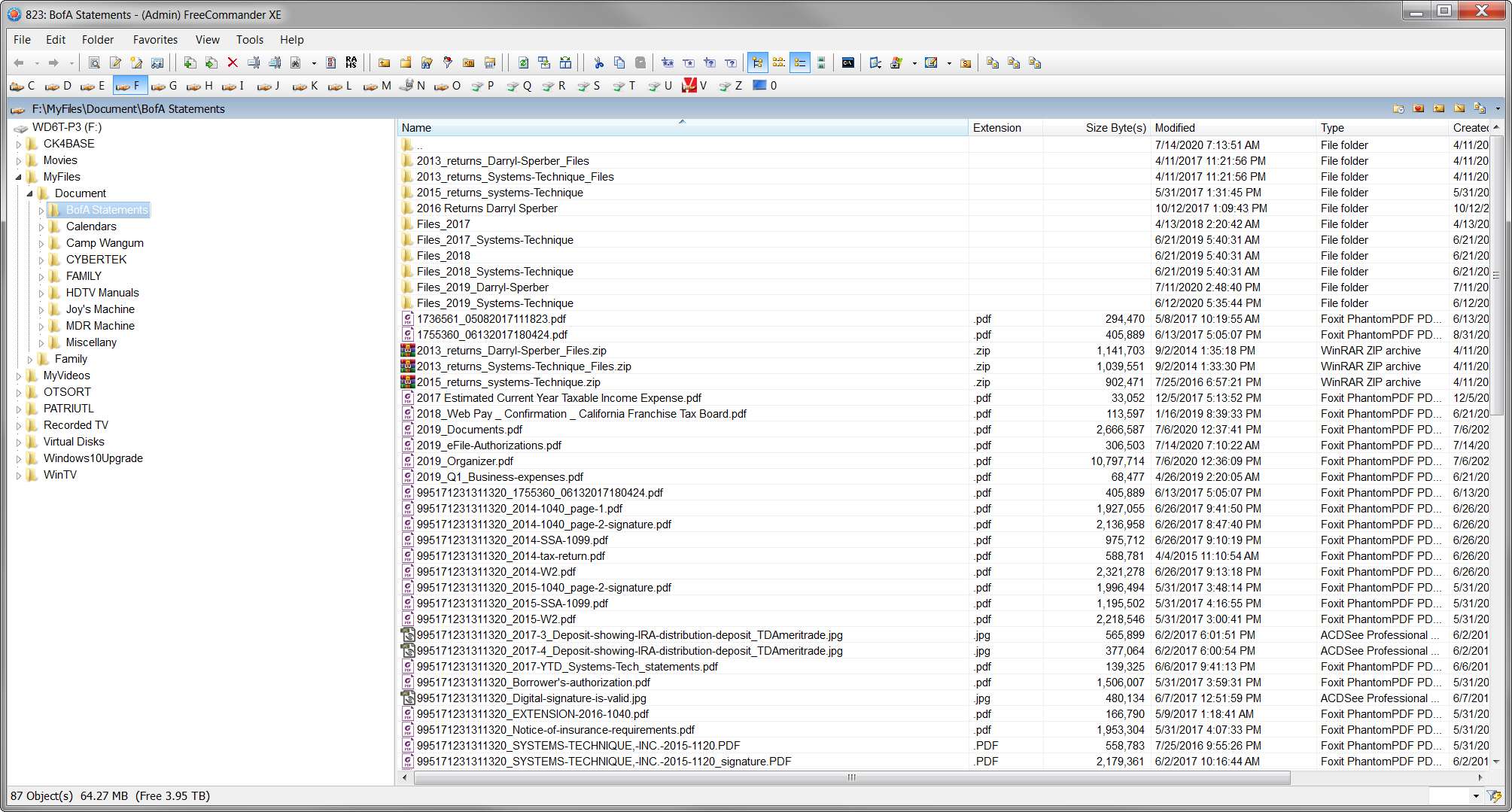 Is there some new setting which I must set to auto-save my column divider locations and so that they persist across close/re-open?
Top

OK, I can reproduce it.
Probably only if using 4K monitor with scaling > 100%.
Marek

However for this second set of evidence screenshots I am now using a second Win7 machine with nVidia GTX1650ti and latest retail driver, with a 1920x1200 monitor (running that "native" resolution) again with scaling of 125%.

Before installing the latest 823 build, I took the following screenshot of my current situation which is running the 8221 (beta) version you provided me a few weeks back, that "fixed" the right-shift creep symptom when using repeated pairs of F10. I also have the window wide enough (just about full screen width) so that there is no horizontal scrollbar on top or bottom.

(1) So this is how the 8221 window looks, just before the 823 install. Columns are perfectly spaced for my likes, and no horizontal scrollbar. TREE/DETAILS divider at the right location in both upper and lower panels. 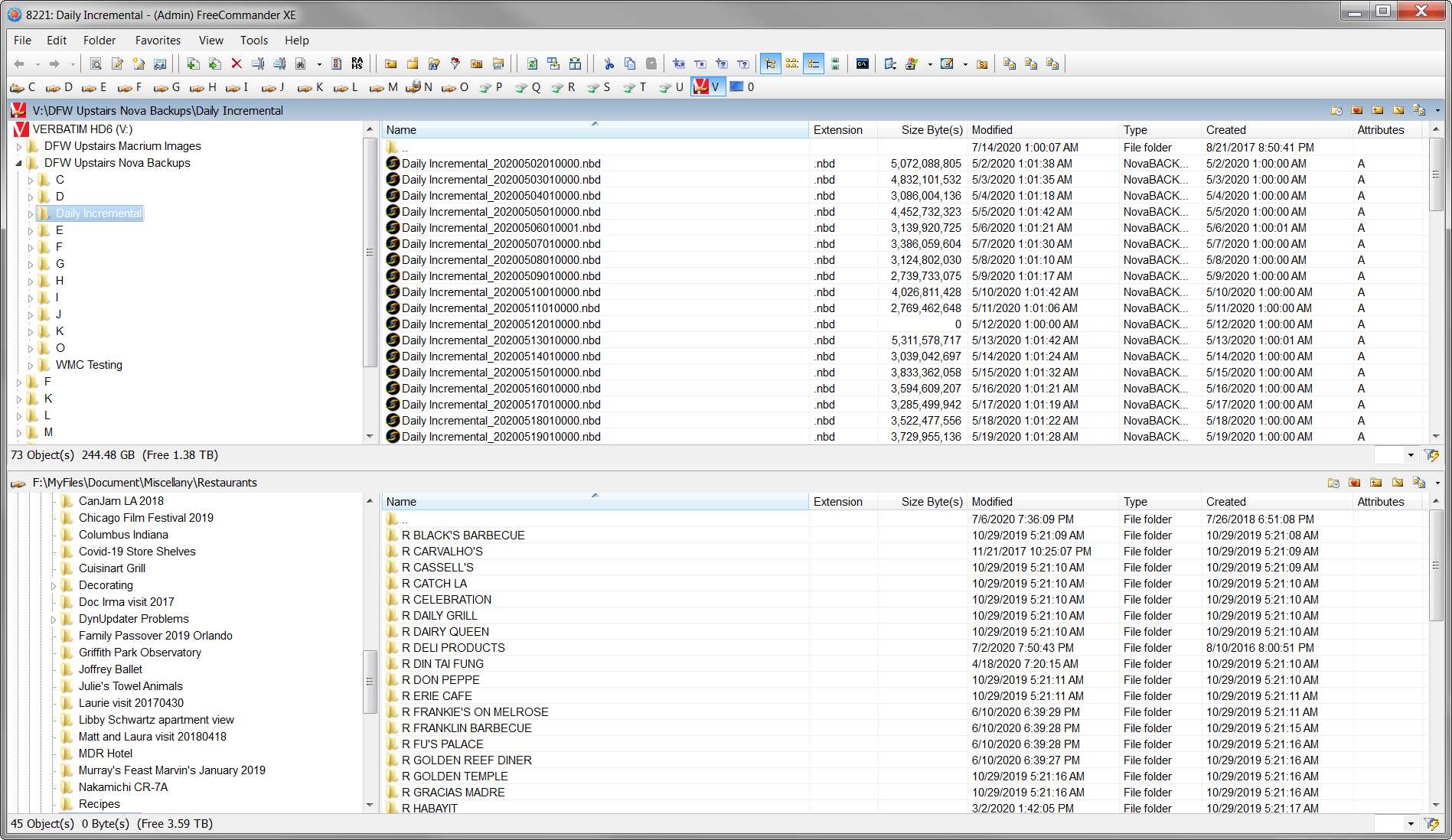 (2) I then closed the program and ran the 823 SETUP installer. I then launched the program, brand new 823 coming from the above 8221 situation. Here is the resulting program window. Note that while the TREE/DETAILS divider is still at the same location, the EXTENSION details column is shifted over to the right, along with the rest of the details pane (both on top and bottom panels). So there is now a horizontal scrollbar present on both top and bottom which was not there with 8221 prior to upgrading to 823. 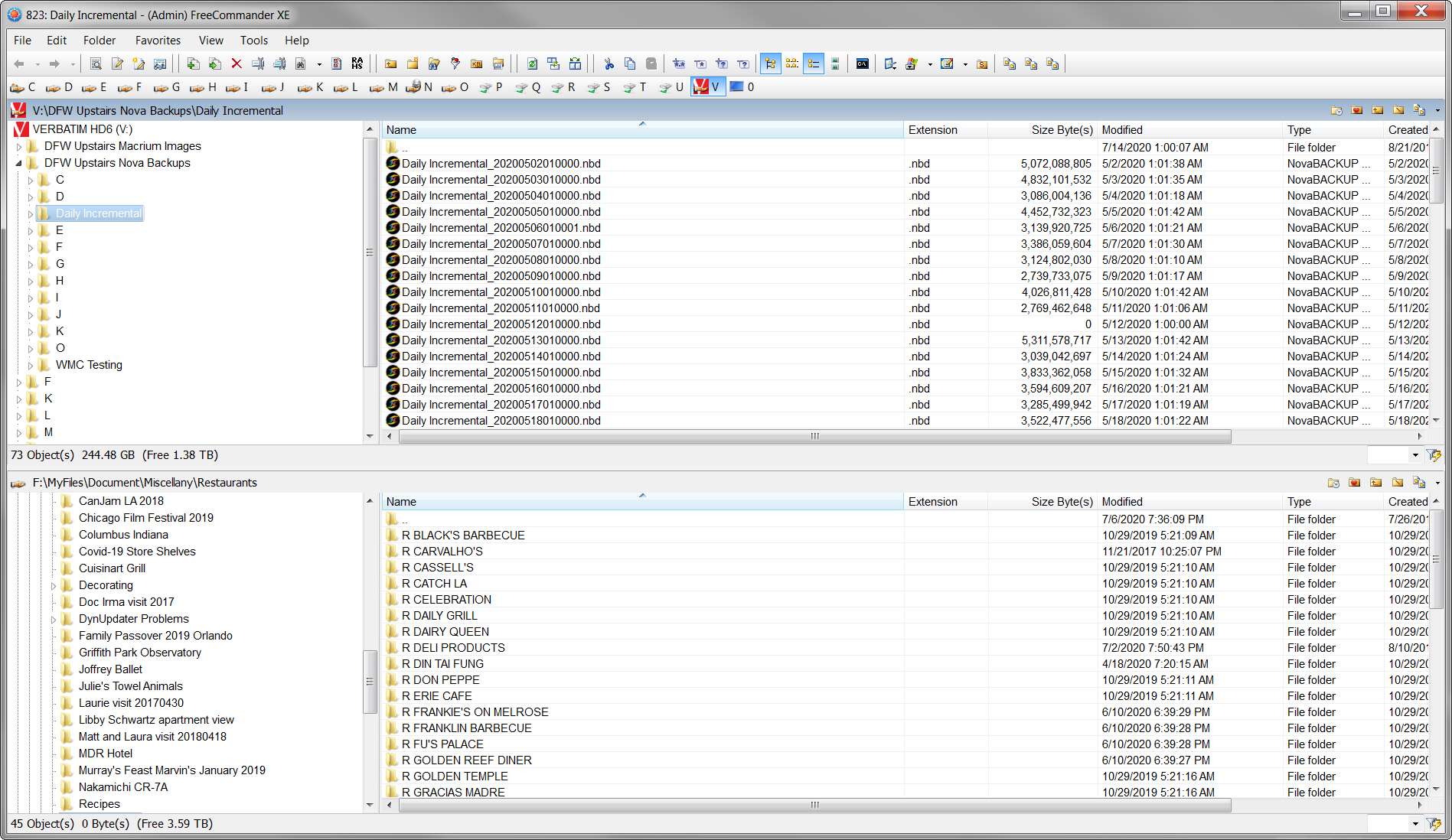 I am not going to drag the details pane columns back over to the left for the next series of tests (re-documenting my second reported bug thread). I will just leave things as they are, with the scrollbars.

I'm attaching five sets of FCXE settings backups. The one from 7/13 is from my normal nightly backup last night, when I was still running 8221. The ones from 7/14 start with a final 8221, and then right after the 823 install, and then progress through 823.

(1) Starting in single-panel mode from how I had previously left things, showing the horizontal scrollbar and wider columns than I need or want, I then manually dragged the multiple problematic column dividers to the left until I no longer had a horizontal scrollbar. So it now looked as follows: 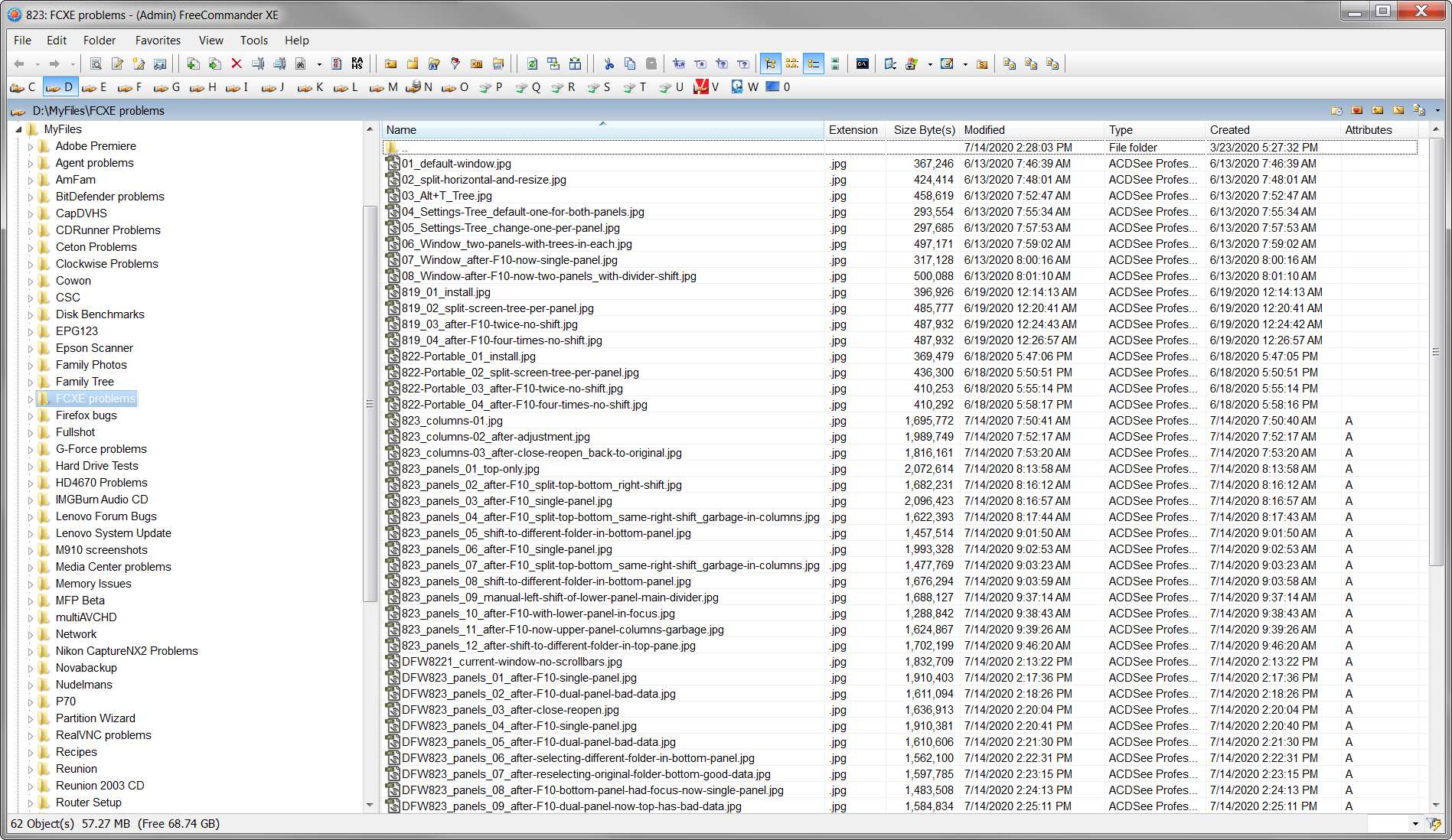 (2) Then I did a "save settings", and "backup all settings", and then closed and re-opened the program. And just as with my earlier tests on the 4K screen system, this re-test on the 1920x1200 125% system fails the same way. My adjusted column divider relocations have all been forgotten, and they have returned to a right-shifted location which again results in a horizontal scrollbar. 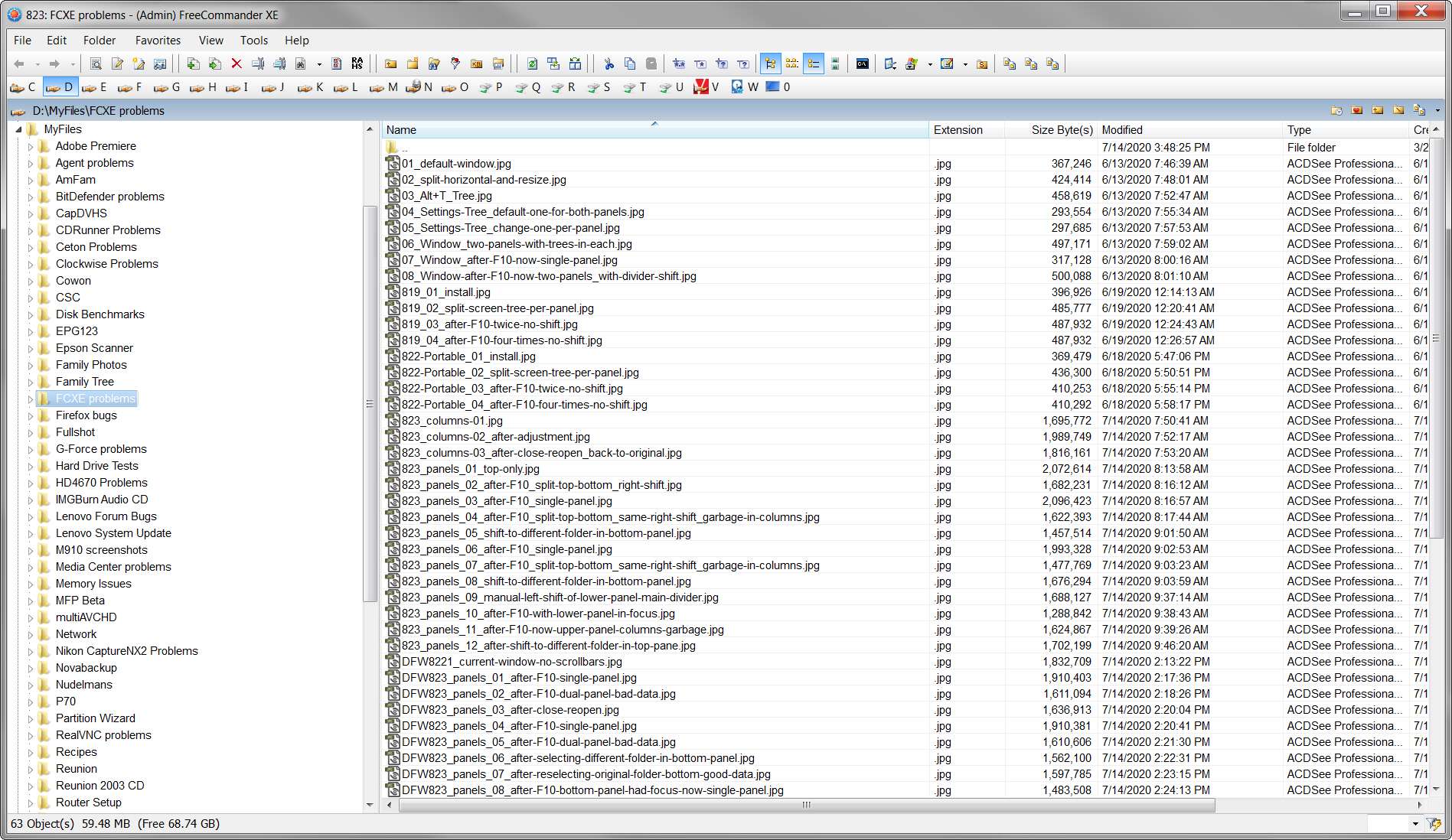 I then once again did a "save settings" and "backup all settings". I am attaching these two 823 settings backups. One is saved after I dragged the column dividers to the left and eliminated the horizontal scrollbar. Then I closed and re-opened the program, observed the lack of persistence for my modified column locations, and took the second settings backup.

I uninstalled FCXE completely and deleted \Appdata totally. Started install of 824 from absolute zero, to install completely new from default.

Then I re-customized my setup, presentation, options, and my Standard Toolbar, starting from the 824 default.