Hello,
my tablet is not recognized by FC while WW-Explorer recognizes. Why?
Thank You
Top

Thank You Marek. It works great.

Thanks, I've asked for this feature years ago!
viewtopic.php?f=5&t=73
Top

Just discovered this capability of using the 0-drive (for "Desktop") and then selecting "Computer, for seeing MTP-connected devices using FCXE.

This not only supports cameras, but also phones (e.g. my Samsung Galaxy S4) which also connect in MTP mode. Very much appreciated capability.

I was experimenting here, to see if I could do the usual F5/F6 types of COPY/MOVE functionality from one pane to another, same as I do with normal folders/files when looking at locations (and MSC-connected removable devices) which have Windows drive letters associated with them. I know I can DRAG/DROP successfully using regular Windows Explorer and MTP-connected devices, so I just wanted to ensure that the FCXE-equivalent would also work here.

Instead, it is what appears to be an internal system-assigned folder name (like a Windows driver), without even having an extension. I assume I can change that value to be whatever file name I want, but it's clearly not what should be presented by FCXE.

==>> Can FCXE be corrected to present the true user-visible genuine external file name in this confirmation dialog box exactly as it appears in the SOURCE-pane?

For example... here's what appears when I try an F6 to MOVE a screenshot PNG file from the \Computer\SPH-L720\Phone\Pictures\Screenshots folder on my phone's internal PHONE (as opposed to its external CARD) storage (shown in the upper-pane) to a target location (shown in the lower-pane): 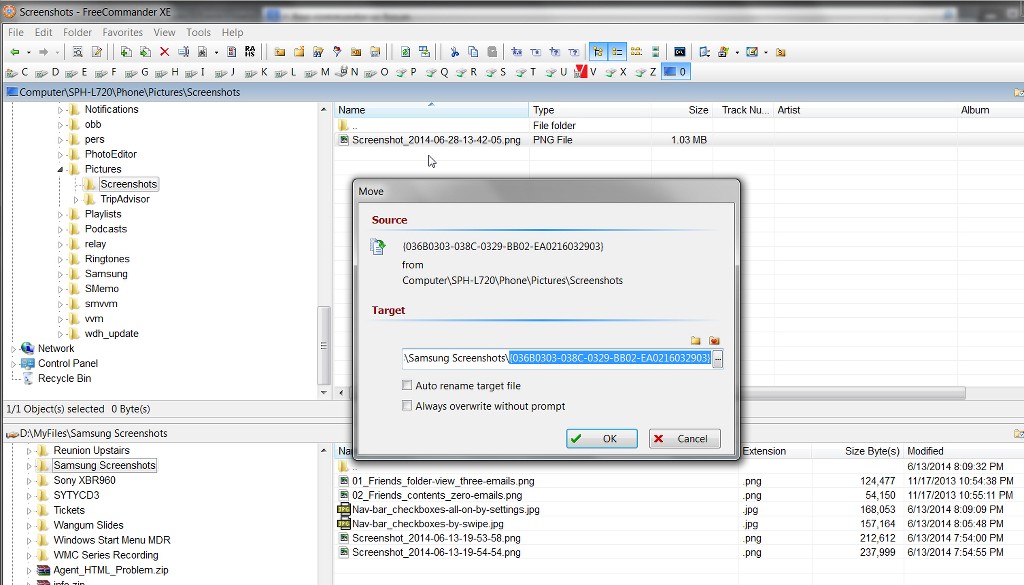 I also had issues using F5 command, but no problem with dragging and dropping from one pane to the other. I'm at least glad that drag/drop works. Previously I had to do all this through Windows Explorer which I didn't like doing. I just don't like to use Windows Explorer.
Top

I tried to rename a file on this device through FCXE and it gives me an error code. Windows Explorer renames file without a problem. Argh, back to using Windows Explorer:(
Top

Did you try launching FCXE as admin?
Top

Users browsing this forum: No registered users and 14 guests