Bugs and other issues or requests which have been resolved.
Post Reply
9 posts • Page 1 of 1
Message
Author

Basically, the same issue exists now. Cannot remember which build it re-occurred, but definitely since the beginning of 2020.

When F10 is clicked to get into dual-panel mode, the bottom-left folder tree window keeps getting wider (creeping in size) each time you toggle F10.

Can anyone else reproduce this re-occurring problem?

Absolutely, occurs with 820 for me as well.

I have top/bottom dual-panel display mode. When I use F10 (or button) to present or hide split-screen mode, the vertical divider in the lower panel which divides Explorer Tree from Details pane keeps sliding to the right every time I toggle it.

I upgraded from 819, and this didn't happen. I'm going back to it right now.
Top

Also, before I reinstalled 819 I had noticed this "divider creep in my lower panel" simply when opening and closing the program. In fact I hadn't noticed the same symptom from using F10 repeatedly (although I always use the button on my toolbar instead of F10) until coming here to post the bug report, when I saw you'd beat me to it. For me it was simply happening as a result of opening the program.

First time it happened I pulled the divider in the lower pane left, to line it up with the divider right above it in the upper pane. It "held" for as long as I was still in the current FCXE instance. When I closed the program, and came back a few minutes later, lo and behold the divider had slid to the right again! That's when I noticed the repeated right-creep every time I closed and opened the program.

Anyway, reverted to 819 and all is well again.
Top

I can not reproduce it.
The tree panel size remains the same, even if I use F10 several times.
Can you reproduce it with default settings?
Is your tree defined as "per panel" or "one tree" for both panels?
Marek

I had gone back to defaults and then re-customized just a few releases ago. But I will attach a ZIP of my 819 SETTINGS files, where everything works fine with repeated F10. You can install that in your own test world to look at it initially. And then just upgrade my 819 to 820 and re-test. It should fail.

Also, it might be that I was mistaken about simply closing and re-opening the program seeing the same symptom. That's not happening now that I've reinstalled 820 to reproduce the symptom and post some screenshots, and also to give you a ZIP file of what my SETTINGS look like now that I'm at 820. Your results should match. I may have confused close/re-open with the fact that manually sliding the lower pane divider back to the left (where I want it) apparently does not "stick". When I close the program having just slid the divider left, the reset location DOES NOT STICK. When I then close and re-open the program the divider has just slid back to the right, at the last location where it was. It doesn't go further to the right than that (which it DOES do if I use F10 twice), but it simply returns to where it last was before I tried sliding it back to the left.

Here are a series of screenshots showing the progression of right-slide of the divider in the lower pane. The first one is how it started in 819, before upgrading to 820. Then I upgraded to 820 and began to use F10 (I missed one screenshot after using F10 the second time, so there appears to be a bigger slide right per use of F10 in that one jump). Again, even if I manually pull the slider back to the left starting position (directly below the divider in the upper pane) it does not "stick". If I close the program and re-open, the slider has returned back to the right, in its last location. 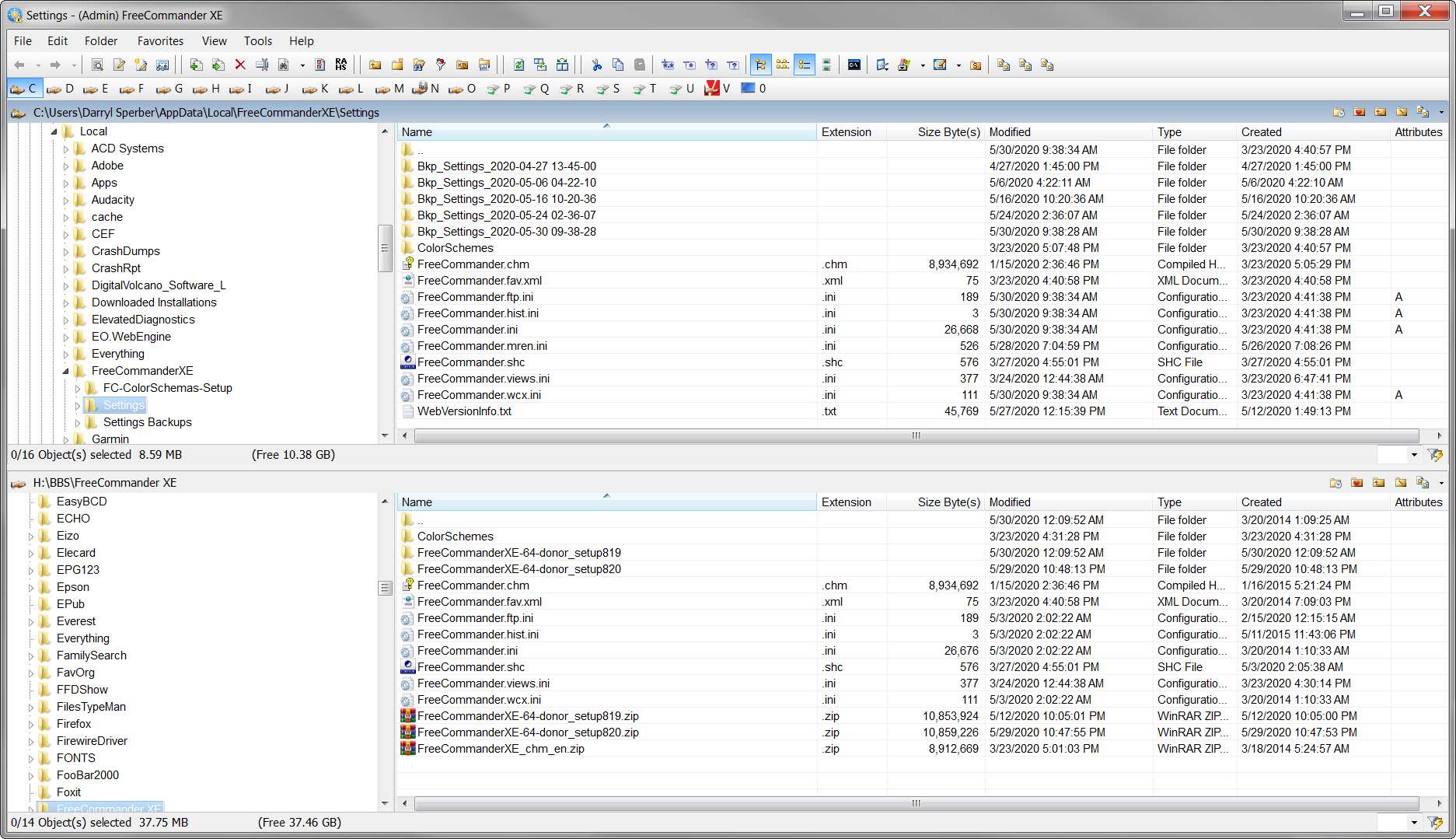 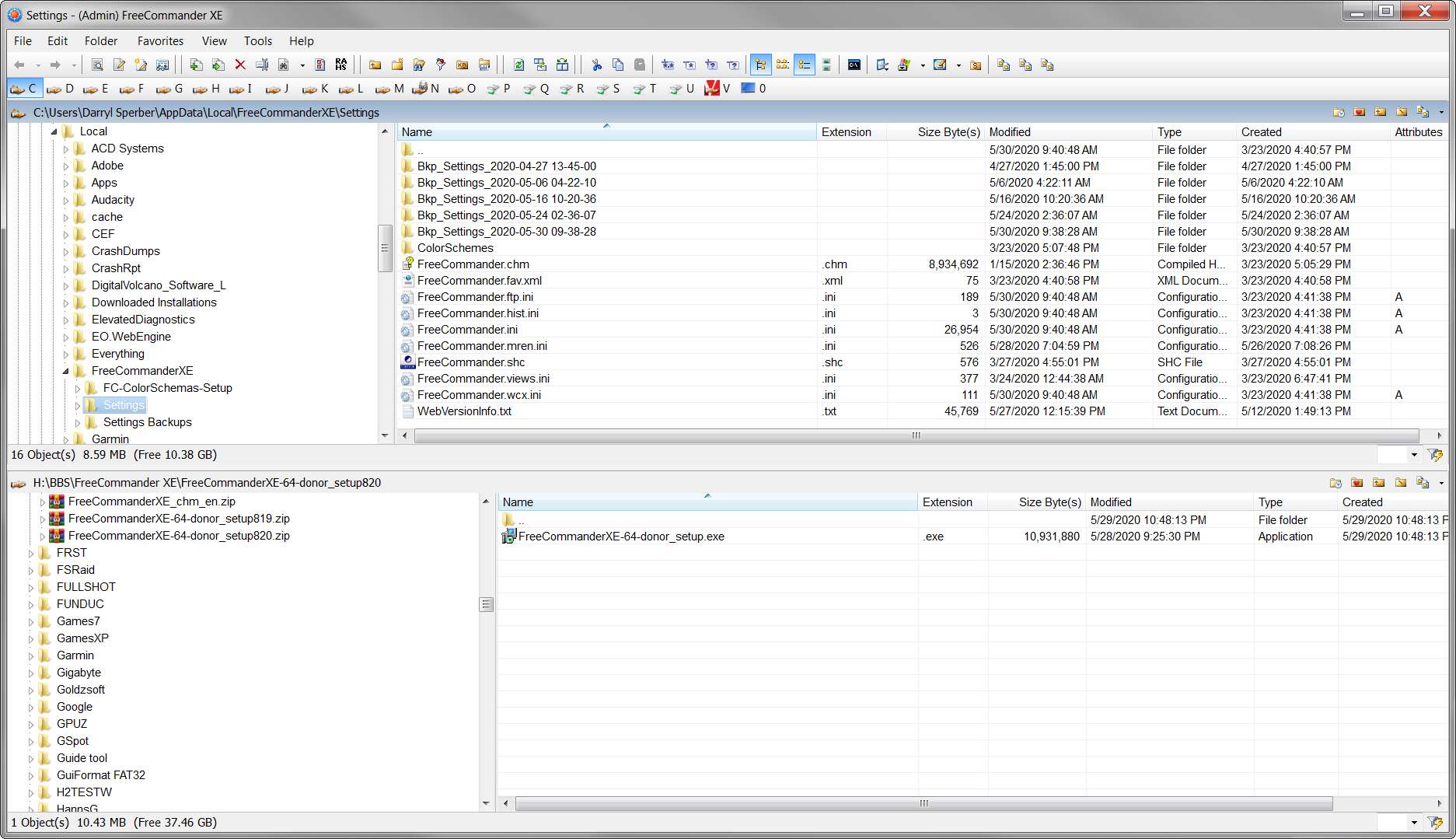 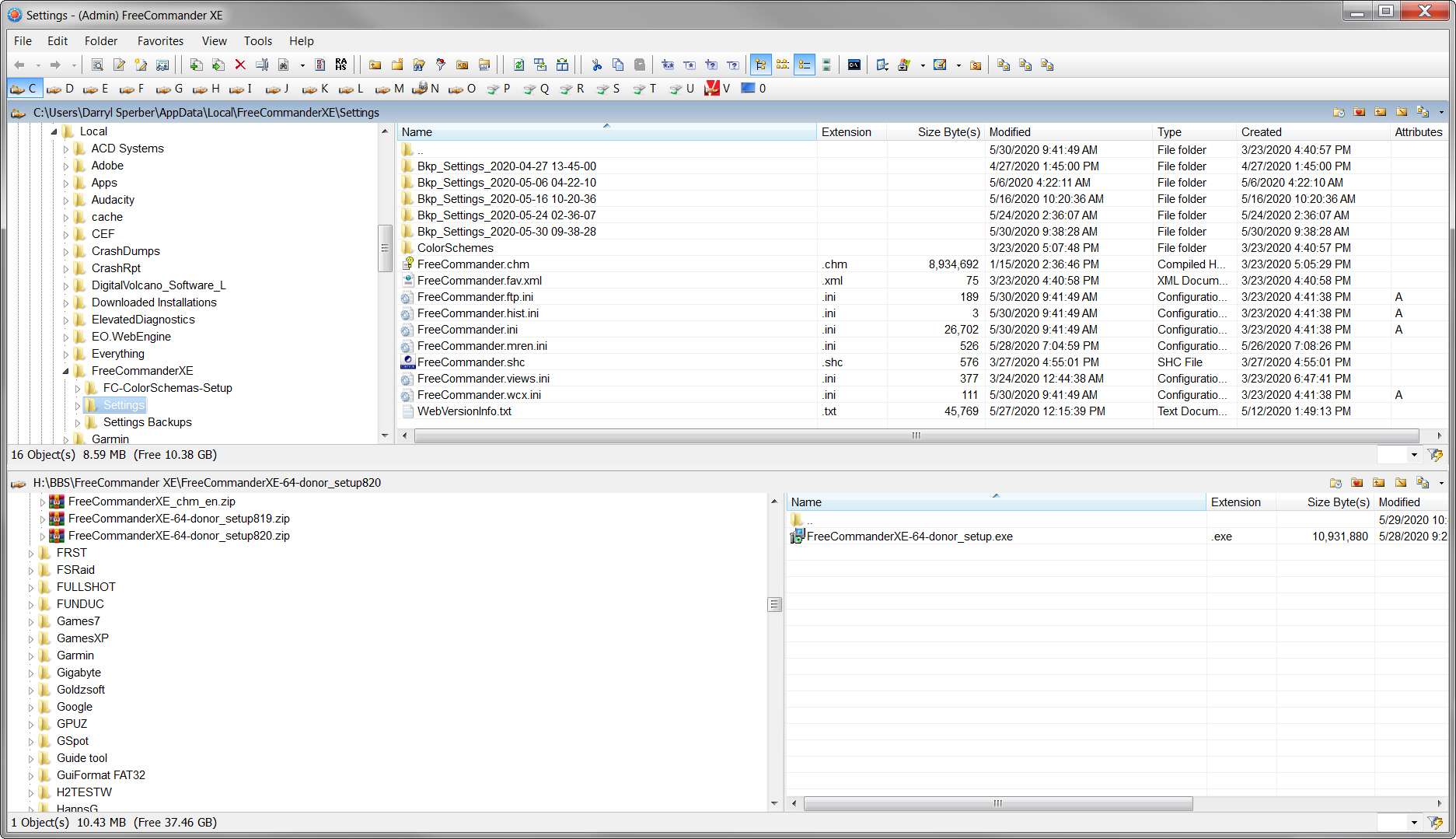 I then pulled the divider left, to try and reset it where it should be. 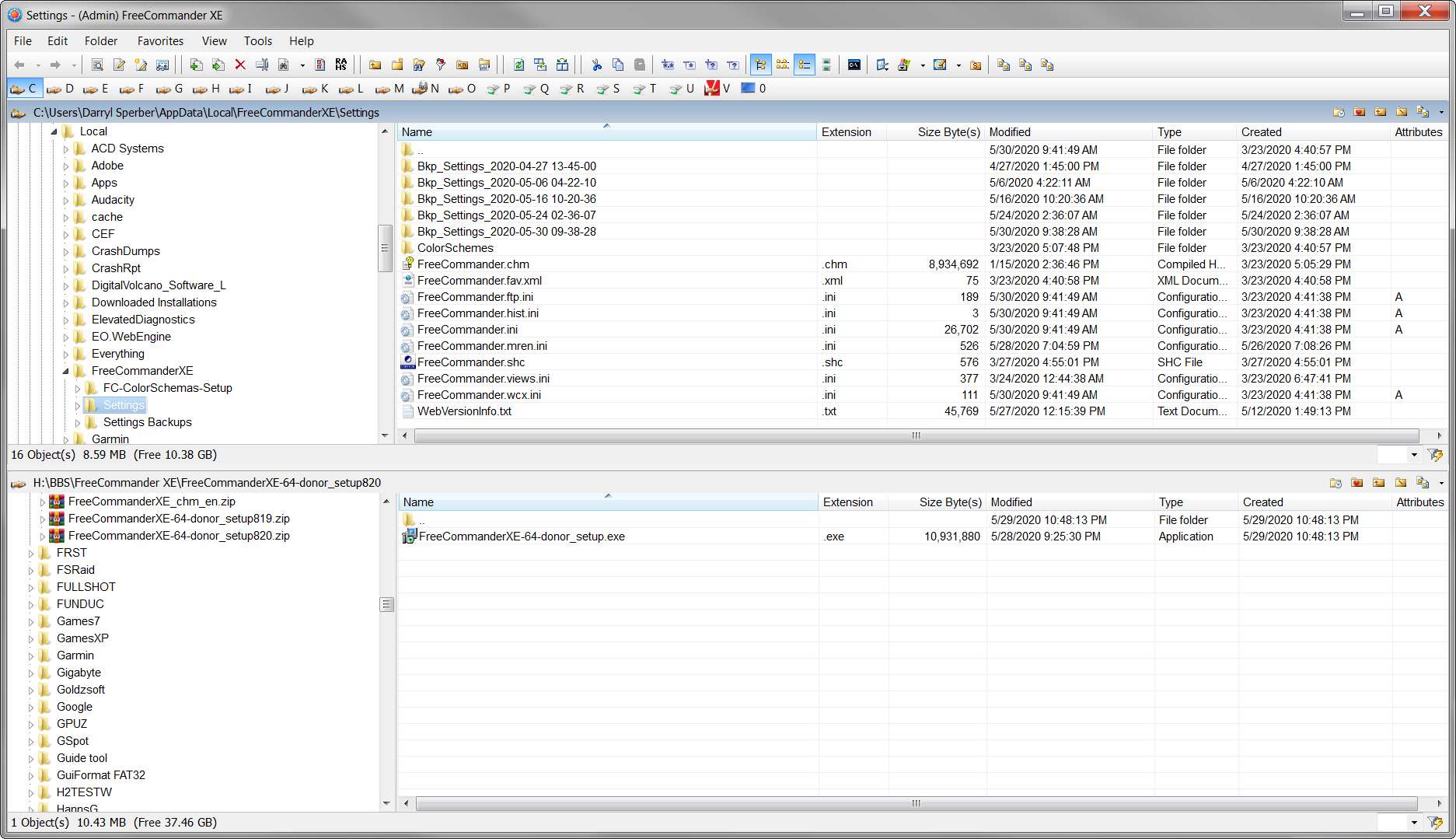 And then I closed the program and re-opened it, and the divider has returned to its previous last location. The reset location to the left was apparently not retained in INI. 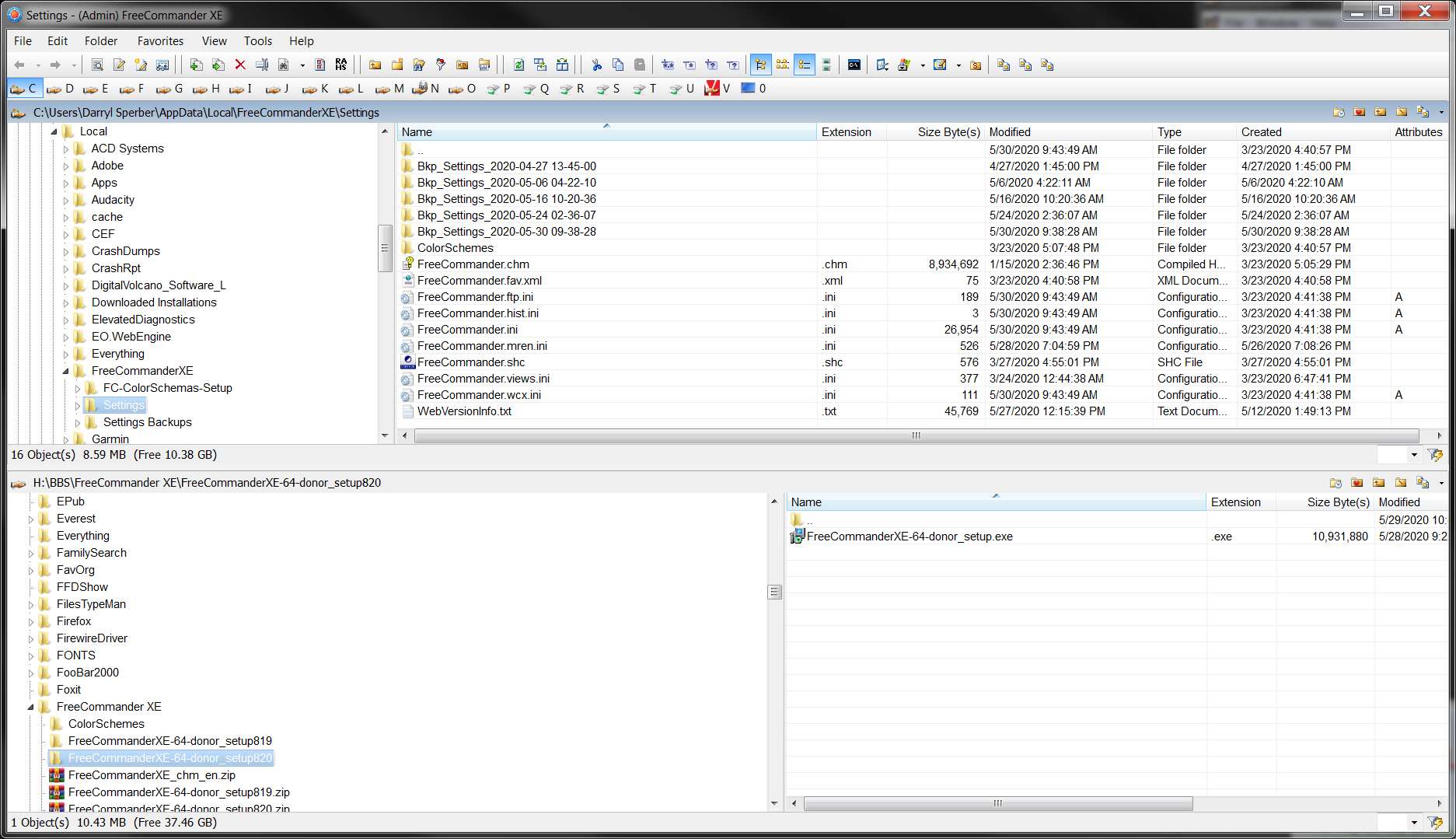 And then I pressed F10 twice, and the right-slide continued one more increment. 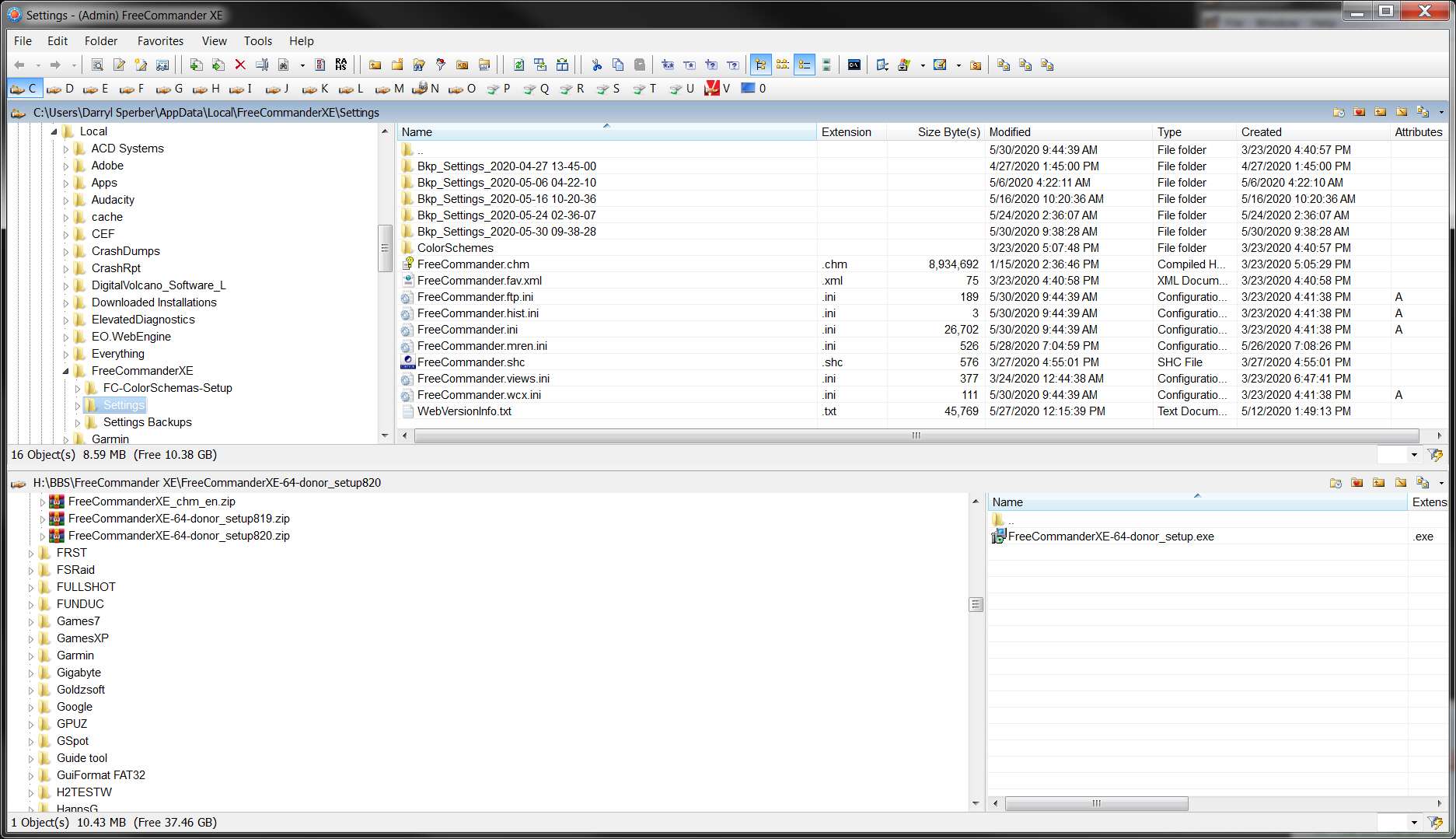 This final divider location is the state at which the attached 820 settings ZIP file was taken. The 819 settings ZIP was taken when 819 was still installed, and when that first screenshot was taken.

I really don't want to reset to defaults again, and then re-customize, to see if this still happens. If you can use and examine my own 819 INI to reproduce the failure (if you can) that would be good>

dsperber: Thanks for the confirmation of my problem, and also for the tip to revert back to v819. Your screenshots match my experience. By the way, a quick tip if you revert back and forth between versions: Add the current version number to the title bar: Tools |Settings | View | Main Window Title | Pattern: add this tag "[release]".

Marek: My folder tree is defined as "per panel" for all my layouts. I have several (7) dual-pane layouts defined, and also a default single-pane layout too.

In each of the dual-pane layouts there is no creeping tree panel impact upon first use of the layout, after FCXE64 is opened. However, if I temporarily F10 to close the lower pane, then later F10 again to re-open the lower pane, the creeping impact occurs. Similarly, in a simple single-pane layout the same experience occurs upon multiple use of F10. Closing FCXE64 and restarting it will duplicate the same set of events.

I also tested both v819 and v820 in a virtual machine (VM) environment, under both Win7_x64 and Win10_x64, using my same custom settings and layouts. These VMs run slower--because I manually give them limited CPU and RAM resources. It was interesting for me to visually see what happens immediately after I hit F10 to open the lower panel when testing v819. Because the VM's video is slower I could see the the folder tree/file list divider in the lower panel actually start off much further to the right, then move/snap to my desired custom position on the left. When I then tested v820, of course that snapping back effect did not happen.

I have yet to do what @dsperber suggests, namely compare the INI files for both versions under a controlled test. But I might, if I can figure out what I can control to be exactly the same in both tests.

Hope this helps. Thanks.
Top

Marek wrote: ↑30.05.2020, 09:54 I can not reproduce it.
The tree panel size remains the same, even if I use F10 several times.
Can you reproduce it with default settings?
Is your tree defined as "per panel" or "one tree" for both panels?

Since I have a copy of my current settings, it's simple to try a "default settings" experiment.

I installed 820 and then deleted all contents of "Settings" folder. Opened the program and it was in a pure default 820 state.

Then I did CTRL+H to change to over/under split-screen mode. I also did CTRL+T to enable tree+details panes for both top and bottom.

And I did also change "Tree" to be "per panel" from its default of "one tree for both panels" as that's what I want.

Then F10 to go to single panel (tree on left, details on right).

Then F10 again to go to dual-panel (top/bottom) mode, and sure enough the divider in the bottom panel has now slid to the right "one incremental unit".

Then F10 again to go back to single panel mode, and F10 again to get back to dual-panel mode. And once again, the divider has now slid right yet one additional "incremental unit" from where it previously was.

Then I dragged the misplaced divider in the bottom panel back over to the left, so that it is vertically aligned again with the dividier in the top panel. Then I closed the program and re-opened it. And sure enough, the divider is once again back to the right exactly where it was (misplaced) before I dragged it over to the left before close/re-open of the program. Its new location that I dragged it to is apparently not being remembered when I close the program.

==> every single "broken" symptom as previously reported fails for me even when using 99% "default settings", minimally modified as described above.
Top

Unfortunately, this very major bug has not been fixed in 821.

Marek, please look into this. It is instantly demonstratable just by having top/bottom presentation with both Explorer Tree and Details panes in both top and bottom (i.e. 4 panes all together). Then toggle split-screen off and on (F10 repeatedly). When the second F10 is processed so that the split screen reappears, the vertical divider in the lower panel that separates Tree and Details has moved to the right by "one increment".

Repeated F10 use continues to move that lower vertical divider further and further to the right, each time by another "one increment".

Program is UNUSABLE in this condition.

Thanks a lot for v824. This bug has gone away. Have a virtual beer on me!

Users browsing this forum: No registered users and 2 guests